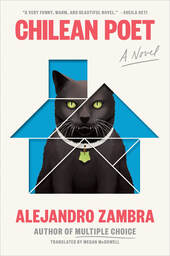 Chilean Poet, Alejandro Zambra, Viking/ Granta, 2022
Chilean Poet complicates the notion of an artistic birthright rooted in national identity . . . [it] treats the thorny topic of collective identity not as tragedy, but as a familial comedy. Its laughs are forged across languages . . . [such] that one happily loses track of any original.”
--New York Times Book Review

Nervous System, Lina Meruane, Graywolf Press, 2021.
“Nervous System burns in the mind long after one has read it, not unlike the ghosts who circumnavigate our psyches, and the winding corridors of history, to hammer us on the head with the raw truth that time is not linear. The distance between the deep past and the present, Meruane shows, is much shorter than we might be inclined to think.”—The New York Times Book Review

Sara Mesa, Among the Hedges, Open Letter, 2021.
Soon, who is almost fourteen years old, has been skipping school and spending her days hidden among the hedges in a local park, listening to music and reading women’s magazines. One day, a fifty-year-old man stumbles upon her hiding place, and the two strike up a friendship. He tells her about birds and Nina Simone, buys her soda and chips, and spends almost every day talking with her.

With spare, direct prose, Sara Mesa imbues these two outcasts with a great deal of warmth, raising questions about society’s prejudices and assumptions, and creating a truly moving novel of an “inappropriate” relationship.

Carlos Fonseca, Natural History, FSG, 2020. A portrait of a world trapped between faith and irony, between tragedy and farce. A defiantly contemporary and impressively ambitious novel in the tradition of Italo Calvino and Ricardo Piglia, it confirms Fonseca as one of the most daring writers of his generation. 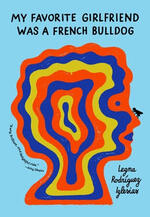 Legna Rodriguez Iglesias, My Favorite Girlfriend was a French Bulldog, McSweeney's, 2020.  Not just a political novel--nor just a queer novel, an immigrant novel, a feminist novel--but a deeply existential one, in which mortality, corporeality, bureaucracy, emotional and physical violence, and the American Dream define the long journey of our narrator and her beloved pet dog, who gives the book both its title and its unforgettable ending.

A visionary novel about our interconnected present, about the collision of horror and humanity, from a master of the spine-tingling tale.

Paulina Flores, Humiliation, Catapult (US)/ One World (UK), 2019
The nine mesmerizing stories in Humiliation, translated from the Spanish by Man Booker International Prize finalist Megan McDowell, present us with a Chile we seldom see in fiction: port cities marked by poverty and brimming with plans of rebellion; apartment buildings populated by dominant mothers and voyeuristic neighbors; library steps that lead students to literature, but also into encounters with other arts―those of seduction, self-delusion, sabotage. 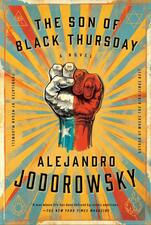 Alejandro Jodorowsky, The Son of Black Thursday, Restless books 2018.
From Alejandro Jodorowsky—legendary director of The Holy Mountain, spiritual guru behind Psychomagic and The Way of Tarot, and author of Where the Bird Sings Best—comes another autobiographical tour-de-force: a mythopoetic portrait of the artist as a young man in the sociopolitical maelstrom of 1930s Chile.

A long drive across Chile’s Atacama desert, traversing “the worn-out puzzle” of a broken family—a young man’s corrosive intimacy with his mother, the obtrusive cheer of his absentee father, his uncle’s unexplained death. Camanchaca is a low fog pushing in from the sea, its moisture sustaining near-barren landscape. Sometimes, the silences are what bind us.

Mariana Enriquez, Things we Lost in the Fire, Hogarth (US), Granta (UK) 2017.
An arresting collection of short stories, reminiscent of Shirley Jackson and Julio Cortazar, by an exciting new international talent.

Macabre, disturbing and exhilarating, Things We Lost in the Fire is a collection of twelve short stories that use fear and horror to explore multiple dimensions of life in contemporary Argentina. From women who set themselves on fire in protest of domestic violence to angst-ridden teenage girls, friends until death do they part, to street kids and social workers, young women bored of their husbands or boyfriends, to a nine-year-old serial killer of babies and a girl who pulls out her nails and eyelids in the classroom, to hikikomori, abandoned houses, black magic, northern Argentinean superstition, disappearances, crushes, heartbreak, regret and compassion. This is a strange, surreal and unforgettable collection by an astonishing new talent asking vital questions of the world as we know it.

A young woman named Amanda lies dying in a rural hospital clinic. A boy named David sits beside her. She’s not his mother. He's not her child. Together, they tell a haunting story of broken souls, toxins, and the power and desperation of family.

Fever Dream is a nightmare come to life, a ghost story for the real world, a love story and a cautionary tale. One of the freshest new voices to come out of the Spanish language and translated into English for the first time, Samanta Schweblin creates an aura of strange psychological menace and otherworldly reality in this absorbing, unsettling, taut novel.

Joan-Marc’s out of work, he’s alone, he has a heart condition, his mother’s addicted to pills, he can’t stand his sister. Otherwise, life is beautiful.
And there’s a lot that his estranged second wife doesn’t know about him. But in Divorce is in the Air he now sets out to tell her. He begins with the failure of his first marriage, describing a holiday taken in a last-ditch attempt to salvage a once passionate relationship.
Recalling this ill-fated trip triggers a life-story’s worth of flashbacks. From pivotal childhood scenes – his earliest sexual encounters, his father’s suicide – he moves on through the years, hopscotching between Barcelona and Madrid, describing a life of indulgence and of appetites. The result is an unapologetic, daring, acerbic novel by an electrifying young writer about love and the end of love, and how hard it can be to let go.

Carlos Fonseca, Colonel Lágrimas, Restless Books 2016.
“Beware, reader, in these pages you will experience vertigo, anxiety and joy. You will become a ghostly presence in a Borgesian world, a camera obscura, where mathematics is a secret weapon, and memory the object of an archaeological pursuit. Loosely inspired by the eventful life of the French mathematician Alexander Grothendieck, Fonseca has created a gorgeous opera prima.”  —Valerie Miles, New York Times Book Review

Alejandro Zambra, Multiple Choice, Penguin 2016
Written in the form of a standardized test, Multiple Choice invites the reader to respond to virtuoso language exercises and short narrative passages through multiple-choice questions that are thought-provoking, usually unanswerable, and often absurd. It offers a new kind of reading experience, one in which the reader participates directly in the creation of meaning, and the nature of storytelling itself is called into question. At once funny, poignant, and political, Multiple Choice is about love and family, authoritarianism and its legacies, and the conviction that, rather than learning to think for ourselves, we are trained to obey and repeat. Serious in its literary ambition and playful in its execution, it confirms Alejandro Zambra as one of the most important writers working in any language.

A visceral, moving, haunting English-language debut examines illness, the body, and human relationships by one of Chile’s brightest young authors.

“Lina Meruane’s prose has great literary force: it emerges from the hammer blows of conscience, but also from the ungraspable and from pain.”- Roberto Bolaño.

My Documents is the latest work from Alejandro Zambra, the award-winning Chilean writer whose first novel was heralded as the dawn of a new in Chilean literature. Whether chronicling the attempts of a migraine-afflicted writer to quit smoking or the loneliness of the call-centre worker, the life of a personal computer or the return of a mercurial godson, this collection of stories evokes the disenchantments of youth and the disillusions of maturity in a Chilean society still troubled by its recent past. Written with the author’s trademark irony and precision, humour and melancholy,My Documents is unflinchingly human and essential evidence of a sublimely talented writer working at the height of his powers.

Alejandro Zambra, My Documents, McSweeney's (US), 2015

“My Documents represents a new form. When I think about Zambra, I feel happy for the future of fiction.”
—Adam Thirlwell

“Zambra is the author of small classics—short in length, but enormous in every other way. My Documents elevates him to an entirely new level.”
—Valeria Luiselli

Álvaro Bisama’s award-winning novel Dead Stars is a story-within-a-story set against the backdrop of Chile’s transition to democracy after decades under the Pinochet dictatorship, filled with characters desperately searching for a way to escape their past, their present, their future: a small-town metalhead; left-wing revolutionaries without a new cause; a brotherhood of cough syrup addicts; punks, prostitutes, and thieves. Through them, Bisama’s tragic novel explores how our choices, the people we know, the places we pass through, and the events of our lives exert an unsuspected influence long after their light has gone out and they have faded from our memory.

Growing up in 1980s Chile, a young boy plays hide and seek in the suburbs of Santiago with his friends while the adults become slowly entangled in the violence of Pinochet's regime - accomplices and victims of the brutal dictatorship.

“[Zambra’s novels] are written with startling talent. And Zambra’s latest novel represents, I think, his deepest achievement . . . 'We go home,' Zambra writes, 'and it's as if we were returning from war, but from a war that isn't over.' This is the giant, poignant condition staged by the novel's playful doubleness—the way the best conjuring trick is the one where you're shown how it's done, which in no way contradicts your belief that what you've seen is magic.”—Adam Thirlwell, The New York Times Book Review

Winner of the 2013 English PEN Award for Writing in Translation

“A fascinating reflection on historical complicity, translated with restrained elegance by Megan McDowell.” --The Financial Times

Carlos Busqued, Under This Terrible Sun, Frisch and Co. 2013


A riveting, thrilling, and shocking read, Under This Terrible Sun paints the portrait of a civilizational in terminal decline, where the border between reality and nightmare has become increasingly blurred.

"Like a hallucinogenic nightmare on a hot night. . . Definitely not an ordinary reading experience."—kulturnews.de

Set in the darkest years of the Pinochet dictatorship, La Vida Dobleis the story of Lorena, a leftist militant who arrives at a merciless turning point when every choice she confronts is impossible. Captured by agents of the Chilean repression, withstanding brutal torture to save her comrades, she must now either forsake the allegiances of motherhood or betray the political ideals to which she is deeply committed.

The Private Lives of Trees demands to be read in a single sitting, and it casts a spell that will bring you back to it again and again.It tells the story of a single night: a young professor of literature named Julián is reading to his step-daughter Daniela and nervously waiting for his wife Vernica to return from her art class. Each night, Julián has been improvising a story about trees to tell Daniela before she goes to sleep, and each Sunday he works on a novel about a man tending to his bonsai, but something about this night is different.